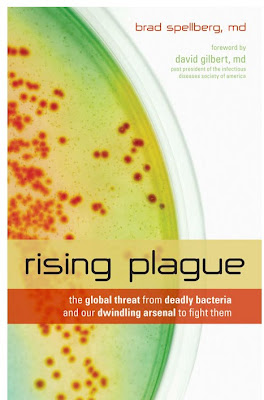 I'm thrilled today to present another guest blogger: Dr. Brad Spellberg, associate professor of medicine at the David Geffen School of Medicine at UCLA and author of the new book Rising Plague: The Global Threat from Deadly Bacteria and Our Dwindling Arsenal to Fight Them (Prometheus Books). This new book is important reading for anyone concerned, as all of us are here, about the narrowing pipeline for new antibiotics against MRSA and other resistant pathogens. That pipeline problem is something Dr. Spellberg knows well: He is not only a practicing infectious-disease physician, but also a member of the Antimicrobial Availability Task Force of the Infectious Diseases Society of America, the specialty society that produced the "Bad Bugs" reports that I've posted on before.

Below, Dr. Spellberg thoughtfully answers some questions about the difficulties of treating resistant infections and of developing drugs to control them.


From your point of view as a practicing ID physician, why is it so difficult to prevent resistant infections?

So, why is it difficult? People have this crazy belief that hospital acquired infections are the result of sloppy medicine. Not so. They are the result of very sick people with tremendously sophisticated levels of intensive medical care being delivered in a concentrated environment (i.e., a hospital). Crowd a bunch of sick people together with plastic catheters, mechanical ventilators, and nasty bacteria, and such infections are inevitable. What we are learning is that we have to go above and beyond normal to stop these infections from happening. Research is needed on how best to do this. It's not as simple as people think.

You can't stop the spread of the resistance itself. It is inevitable.

Humans did NOT invent antibiotics. Bacteria did...about 2 billion years ago. And they invented antibiotic resistance at the same time. So, bacteria have been creating and defeating antibiotics for 20 million times longer than humans have even known that antibiotics exist (about 78 years, as the original sulfa compound was developed in late 1931 by Gerhard Domagk). Over the past 2 billion years, bacteria warring among themselves have learned to target virtually every targetable biochemical pathway with antibiotics, and have learned to create defense mechanisms to defeat virtually all such antibiotics. They are already resistant to drugs we haven't even developed yet. It is bacteria that cause antibiotic resistance, not humans.

What humans do, is we apply natural selection when we use antibiotics. We kill off susceptible bacteria, leaving behind already resistant bacteria to replicate and spread their resistance genes.

Why are "antibiotic stewardship" policies not a sufficient remedy for controlling resistance?

See above. Stewardship leads to conservation. That is half the battle, but by itself it will only lead to a slowing of the inevitable exhaustion of the resource.

Furthermore, the initial calls for stewardship were made by people like Max Finland in the late 1940s and early 1950s. This is not a new call. It's more than a half century old. It just doesn't work very well. An analogy is the temptation to say that we don't need condoms to stop the spread of STDs, we just need abstinence. It is true that abstinence will stop the spread of STDs. But, an abstinence-only policy just doesn't work. You've got to have the condoms too. Well, stewardship, by itself, just hasn't worked after more than 60 years of calls for it. It is too hard to change behavior, and the pressures on physicians not to be wrong about their patients' illnesses is too great.

What do you consider the chief impediments to developing newer/better antibiotics?

The two major impediments are: 1) economic, and 2) regulatory.

The primary economic impediment is that antibiotics have a lower rate of return on investment than other classes of drugs. You make a lot more money back on your R&D investment if the drug is taken every day for the rest of the patient's life (e.g. cholesterol, hypertension, dementia, arthritis) than if it is taken for 7 days and then the patient stops because he/she is cured.

The regulatory problem is a startling degree of confusion at the FDA regarding what types of clinical trials should be conducted ot lead to approval of new antibiotics. There has been a total rethinking of antibiotic clinical trials at the FDA over the past 5 years. Right now, companies don't know what trials they are supposed to do to get drugs done, and increasingly the standards are calling for infeasible study designs that simply can't be conducted. This revisionist thinking is being driven by statisticians who know nothing about clinical medicine or patient care. They are asking for things to be done that can't be done to human beings. The balance of clinical and statistical concerns is totally out of whack, and must be restored if this problem is to be solved.

What types of policies are needed to kick-start development of new antibiotics?

For the economic problem, we need Congress to pass legislation that creates special economic incentives for companies to re-enter the antibiotic R&D market. The return on investment calculation must be changed. Antibiotics are a unique, critical public health need. Congress should recognize this. Examples of programs that would work include increase in funding to scientists (e.g. via NIH) who study bacterial resistance and antibiotic development. Increased small business grants to help translate basic science discoveries to lead compound antibiotics. Tax credits, guaranteed markets, patent extensions, and prizes to serve as pull strategies to help companies improve the return on investment for antibiotics.

For the regulatory problem, Congress needs to stop hammering the FDA into a state of paralysis, where fear permeates every decision to approve a drug. We should be encouraging a balance between statistical concerns and clinical concerns, and we need to restore a sense that the agency is regulating drugs used by physicians for patients, and that trials showing those drugs are safe and effective must be feasible to conduct and relevant to how the drugs will be used in clinical medicine after they are approved.
Posted by Maryn McKenna at 10:41 AM

My daughter acquired both MRSA & pseudonomus(sp) and was treated at UCLA-----Maybe doctors should be taught that when a wound does not heal there may be a problem--both episodes wounds did not heal, her second episode was discovered because my husband & I insisted-yes insisted she be seen and we knew there was a problem because the wound would not heal & sores were popping up-that was when the pseudonomus (sp) was confirmed---
If we would have waited it could have been too late.