Well, constant readers, didn't expect to be gone *that* long. Many apologies. There was a good reason — actually, several: I attended a journalism meeting, and spoke at a second meeting. But most important, I received, marked up, and returned the galleys of SUPERBUG. Yes, it's really starting to look like a book now. There will be things to share, soon.

Meanwhile, I'll try to roll out some of the many, many pieces of news and research related to staph that have emerged in the past few weeks. Today: News on animals, and our old opponent, MRSA ST398.

First: A team from the Universidad de La Rioja reports in the Journal of Antimicrobial Chemistry the first finding of MRSA ST398 ("pig MRSA," archive here) in food in Spain. They tested 318 raw meat and wild-game samples (chicken, pork, veal, lamb, turkey, rabbit, game bird, wild boar, deer, hare) and found ST398 and other MRSA strains in 5 of them, an incidence of 1.6%. The authors write: "Although MRSA prevalence in raw food is low, the risk of its transmission through the food chain cannot be disregarded."

Importantly, one of the other strains found in the meat of these animals is an uncommon variant, ST125-t067, that has already been implicated in large numbers of hospital infections in Spain and is resistant to ciprofloxacin (Cipro), erythromycin and a third antibiotic, tobramycin, in addition to the usual suspects. The other non-ST398 strain is ST217, which is a variant of a long-known hospital strain, and is also resistant to Cipro, a very valuable drug for skin and soft-tissue infections. So it appears the contamination may cross both ways, from animals, and to animals as well.

Next: If the prevalence of ST398 is so low in food, why do we care? We care because of where those organisms go next — into hospitals, among other places. A Dutch/German team that includes the original identifier of ST398 in humans are reporting that they have found an association between the density of pig-farming in parts of Germany and the probability that patients admitted to hospitals will be carrying ST398 with them, creating a possible source for nosocomial infections. R. Kock and colleagues screened 1,600 pigs on 40 German farms, and also reviewed screening results for every MRSA-positive patient admitted to the University Hospital-Munster from 2005 through 2008. They found ST398 on 70% of the farms, and also found that ST398 represented 15% of the MRSA isolates at the hospital in 2005, rising to 22.4% in 2008. The key association: The patients carrying St398 were more likely to have contact with pigs in their daily lives, and also with cattle, than patients who had other forms of MRSA or no MRSA at all.

And finally: How do you stop the evolution and spread of antibiotic-resistant organisms in livestock? One good way is to stop giving teh livestock antibiotics in the first place. In a column at the Huffington Post, Laura Rogers, project director of the Pew Campaign on Human Health and Industrial Farming, takes on the oft-repeated assertion that you can't farm without them without risking the lives and market place of your livestock, and offers the example of Denmark, which did ban antibiotics in animals, and which has healthier, more profitable livestock as a result:

American agribusiness often has criticized Denmark's 1998 ban on antibiotics, calling it an outright failure. But compelling new research presented by a Danish scientist earlier this year showed the opposite, revealing that antibiotic use on industrial farms has dropped by half while productivity has increased by 47 percent since 1992. Danish swine production has increased from 18.4 million in 1992 to 27.1 million in 2008. A decrease in antibiotic-resistant bacteria in food animals and meat has followed the reduced use of these vital drugs.

Posted by Maryn McKenna at 10:20 PM No comments: 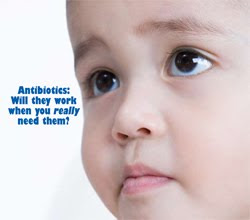 Every year, the CDC sponsors a week-long observance called Get Smart About Antibiotics Week, intended to bring attention to this issue of antibiotic misuse that all of us here are so concerned about, and to link the efforts of federal and state agencies, nonprofit groups, and anyone else with an interest.

Today marks the start of the 2009 week, and of course it comes as a crucial time: With the H1N1 flu pandemic causing so many people to seek care for upper respiratory illnesses, the possibility of antibiotics being misprescribed for a viral illness is greater than usual.

The homepage for the CDC campaign is here. There is an abundant list of materials, images, campaign strategies and suggestions for framing the conversation, along with graphics (I've lifted the one at left from a poster aimed at parents of young children), PSA sound files, and cute little web widgets such as the image at right above (sorry for the poor layout skills, it's a busy morning).

Since this comes from the CDC and is therefore taxpayer-funded, all of it is open-access. So go, already.
Posted by Maryn McKenna at 8:25 AM 3 comments:

A reminder: It's World MRSA Day

Posted by Maryn McKenna at 5:57 PM No comments:

Constant readers, I'm thrilled to let you know that SUPERBUG has been chosen one of "50 Excellent Public Health Blogs" by the nursing website RNCentral.com.

We are in extremely flattering company. Also among their choices are:
along with many others that are new to me and that I look forward to checking out. I urge you to do the same.
Posted by Maryn McKenna at 9:01 AM 1 comment: